I know, I know. There was an earthquake just now. Of course I heard. Sounds like it was big. The Big One, maybe.

I’ll get around to it, for sure by tonight. There’s just so much to get through.

I can’t believe it’s been twenty-five years since our first date, when you told me you could tell the future, and then you proved it.

I remember you casually suggesting you knew that a quake was going to hit somewhere in the next half hour, but you didn’t know exactly when or where. (“I’m not omniscient,” you admitted.) Twenty-five minutes later, just as Vietnamese beer and easy conversation had obscured the memory of your boast, my phone explodes with texts.

“Whoa! Did you feel that bro? Coming up from South Bay!”

“Were you near the earthquake? Call us please.”

Thirty-eight miles northeast, you gripped the table, eyes twinkling, readying yourself for the approaching rumble. I glanced around the Alhambra phô joint. A handful of white-haired couples sipped their spicy soup, oblivious. One young guy slurped noodles and scowled at his phone. We waited for the shock ...

Not so much as a rustle of the ivy that draped the place’s low ceiling.

“Must have been a shallow one,” you smirked, and reached for the sriracha.

I didn’t ask how you’d done it, but you told me anyway, later. We were lying in bed next to your window, still sweating and wishing in vain for a night breeze, and you informed me that there would be no further details to read about #PVQuake in the morning. There was no #PVQuake at all. Some pre-cached scraps of creative writing, a handful of redirect hacks and a ripely insecure Android build in my pocket was all it took. You told me a lie, and used my most trusted screen to corroborate it. How in hell would I have checked your facts, once you’d pwned my phone?

I realized I didn’t care. Moreover, it didn’t objectively matter. You had told the future, inasmuch as I was unable (unwilling?) to prove you wrong. The facts were weaker than the tech. Right now had lost out to Last Updated.

I realized I was already madly in love with you.

What you saw in me back then is one of the great mysteries, especially given that this was pre-Lipidra.

The pill was an even bigger deal than people give it credit for. It gave me proof of what I had always suspected: the “fun” in exercise was no fun at all, only the body’s endorphic pittance in exchange for scheduled maintenance. Remember all the boring fit people who were terrified that Lipidra would make everyone as boring and fit as them, overcrowding the world’s clubs and beaches with nouveau-buff? All that handwringing, and then exactly the opposite happened. Without the excuse that we needed to get off our butts or we’d die young, most people stopped pretending it was fun and started using that one-hour-three-times-a-week in much more stimulating ways.

The pill not only freed up time once used for exercise; it got people thinking about everything IRL and whether it was worth their time (because we may die prettier now, but we croak all the same). I remember taking the train to work, those last couple years I was still going in person, so I could get a little extra reading done on my commute. I’d look around at the car full of strangers, physical proximity meaning nothing. Every soul oblivious to every other. I’d watch them stare glass-eyed down at their phones, or zone straight out ahead through a pair of smartspecs, and think, “Why are we doing this? Why are we burning fuel to move bodies to remote locations to do the work (and play) that 90 percent of us could do from home, gaining no physical or social benefit in return?”

Beyond breatheeatsleepfuck, humanity’s need to connect is our most ubiquitous compulsion, by far. It’s basically immaterial whether people enjoy it or not; most simply can’t not connect, given the opportunity. We are curious, social beasts, but we crave efficiency, as well, and in here we’ve got both. Even an old text chat avatar, static though it might be, is far superior to (as you used to put it) “the top of my head as I ignore you for my phone.” Simultaneous conversations. Multitasking without offending anyone. No compromises, no downtime! It is not surprising that people gravitated in this direction, and from there it’s just a matter of advancing the sensory experience to bring more and more stubborn apes into the boat. Say, oh, I don’t know ... you move far away to pursue a geobotany post-doctorate at Ithaca College, studying the effect of rising Finger Lake temperatures on upstate New York wineries. Your only option to be with the people you love every day is stim-share. Isn’t the slight hit you take in sensory resolution an acceptable tradeoff for what essentially amounts to the power of teleportation? (Not to mention the power of “not having to befriend dull new people because you happen to live or work near them.”) I am reminded of the crybaby audiophiles who railed against the loss of quality in the mp3 age, to which a deafening horde of real music fans responded by brandishing their SpotifiPods and good-enough earbuds and crying, “Recordstore of Alexandria, bitch!”

Before you know it, you’re not going out there much. Even if there’s an earthquake.

Now, if my place or my rig or my person had been damaged this afternoon, that would be a different story. Of course that would be worthy of my immediate attention. But I would’ve been notified, had that been the case. None of my friendlist feeds look dire, either. As it stands, I would call this a very successful test of the seismic dampening in my new ’pod. (Vizio! Still the best.)

As it stands, #BigOneLA is in my high-priority queue, and when I do get around to it, I’ve got my choice of literally hundreds of CNN full-stim clips, stereo LA city feeds, public videosynth ... you get the picture. Don’t worry, I promise I won’t miss the Observatory tumbling off Mount Hollywood; apparently the feed from the coelostat balcony as the sensor lurches out into freefall is breathtaking.

But it’s not the only thing going on:

*You should see my feed backlog since CES ended. I haven’t even seen the Brooklyn levy fail yet, and that was Tuesday!

*I’ve gotta queue for Radiohead tickets at 4—I’m sick of being a passive login at shows. For once, I want to be one of the ones driving those front-row remotes.

(Did I say realtime has ceased to matter? Scratch that.)

Not to mention, you know, work. I’m a build behind in at least three different modules ... and the physics of Tom Cruise’s ageless CG musculature aren’t going to simulate themselves.

(Somewhere, my father is frowning down on me, but screw him. I’m physicist and artist! Just ask Mickey Mouse, or either Warner Brother.)

Shit—and don’t let me forget our taxes! You see my problem?

To those who say you can’t run your life as an asynchronous stack, I respond, “Take a number.” (Rimshot!) They can keep their jumbled meatspace lives. I love that you work out there, and that you love it. You love Earth all the more for its being old and broken and slipping further all the time. Mother Nature in the nursing home, with lung cancer and Alzheimer’s, and you’re still visiting her every day. You’re a better person than I.

Take an extra breath of Adirondack air for me, would you?

But if I’m being honest, the sheer mutability of all that outweighed any benefit I ever enjoyed. How come those crotchety librarians never stop to consider that “book smell” is the scent of chemistry slowly destroying the information in that book? Those pretty LA sunsets we watch, gelato cones in hand, are tinted by the same exhaust vapors that are, bit-by-bit-by-bit, bringing us to a boil.

Sorry, I know you know this. You’re perfect because you acknowledge the subjectiveness of “perfect.”

My perfect is “redundantly archived, tagged and searchable, and accessible anywhere, anytime, forever.” For others, it seems to be “pushing arbitrary heavy things around in order to stay fit, forever.” And I’m sure when the endtimes come, there will be Luddites sitting in traffic, maually driving their own cars, and loving it. Wasting half their precious lives they could use to work or play instead.

But I suspect most will come around eventually. Look at us—how could we exist otherwise? Our marriage? In what previous age could soulmates be free to chase opportunities separated by 2,000 miles and still, by any reasonable sensory standard, sleep next to one another every night?

Don’t worry, the poetry of the timing of the quakes, “real” and realer, this quarter century apart, is not lost on me. I’ll be at the restaurant tonight. Live and in-the-flesh, one night only. I’ll even put in my antique dumb contacts so that we might, simply and without distraction, moon at each other over the bread pudding.

Until then, though, I’ve gotta go. There’s so much to get through.

Luke R. Pebler is a graduate of the 2012 Clarion Workshop. His fiction has appeared in “Ray Gun Revival” and Michael Moorcock’s “New Worlds Magazine.” 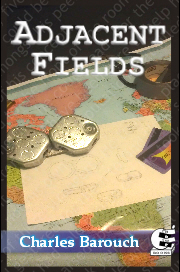