You Belong to Me

THE JOB BROUGHT ME TO A CORNER bar in the Skill, the Appalachian fringe of the Megalopolis running from Philly to New York. Its brown walls, stained oak from a century ago or more, are a welcome change from the drab, metallic gray riddling urban areas these days. The ceiling, beaten tin, is stained dark with years of smoke. The bar is nearly empty. The dawn finished opening her eyes only a half hour ago. The only people here are the serious drunks, the ones who live upstairs and wander down to drink away whatever money they can scrape together.

This is a scout job. My mark should be here. I know nothing about him. The Boss will tell me the rest, via the comm buried in my ear, when he feels like I’ve seen enough.

The place is typical for this area. Nothing stands out. Nothing out of the ordinary. Just a corner bar in the Skill.

A woman draws my attention as she stumbles down a stairwell nestled near the bathrooms in the back, still swimming from the night before, no doubt.

I turn my eyes to the front door, which is blocked from the outside by plywood despite being flanked by windows with half-lit neon signs advertising beers this place doesn’t have. Only the side door is accessible from the street. A basement door isn’t apparent, but there would be one. I won’t have to report all of this to my boss; he’s undoubtedly watching the live feed streaming from my eye implants.

I sip a flat, lukewarm beer to blend in. I won’t need to stay much longer.

“You belong to me because I’ve seen you,” says the woman who barely handled the stairs. She slides onto the bar stool beside mine and signals for a drink. The bartender, an old man with a wrinkled face and a chin that sticks out so much it looks like it’s being sucked up his nose, takes a cloudy glass from behind the bar and trudges heavily over to the tap.

I ignore her, swig down the rest of my beer and get ready to leave. It’s best not to be remembered. Not as many people in the Skill are as modded as me, but enough are that my arm—wires and metal and a small, dim screen—wouldn’t stand out. The bartender has plating on his legs, probably support given his age. His faded blue slacks bulged at the calves more than normal, a dead giveaway. Most people nowadays are modded up. A small minority in the country, the areas not far west of here, shun it.

“Morning, Loose,” the bartender says, sliding her a glass of the same swill I drank. Either “Loose” is short for “Lucy” or she’s got a reputation to be proud of.

“You can’t leave without finishing that,” Loose says, nodding to a beer I don’t expect to have in front of me.

Refusing her drink would attract too much attention. I have a job to do. I tell myself she’s just being nice.

“How you figure?” I ask, taking her in. She was probably pretty before whatever happened to her to make her this much of a trainwreck. Her hair, a pale gold streaked with black at the roots, hangs limply and freely about a tired face. Green eyes sit above bags that sag blue almost down to her mouth. But those spheres have lightning in them, and maybe a little fire. If not for the damage she’d done to herself, I’d call them striking for their beauty. Just now I’d say her eyes are striking for what’s missing behind them.

“Well, hot stuff,” she says, leaning on me, presumably as much for support as it is her putting the make on me. “I got your image in my head. Full scan. I can close my eyes—,” she pauses to close them, “engage my mod, and I’m fucking you wild.”

She pauses again to gauge my reaction. I don’t have one. Since my change, it’s been hard for me to talk to women and there’s no normal way to react to her kind of talk anyhow.

“There’s nothing you can do about it,” she says. Her eyes stay closed, she still leans, and I wonder if she’s got her mod engaged. It must be neural because those jade orbs in her face aren’t made of wires and plastics and metals. It doesn’t seem practical to use it here. But I never heard of this kind of mod so maybe she’s lost in her own digitized mind.

It would be impolite and attract too much attention to let her fall. Half of me didn’t mind having a girl on my arm, despite her state. I still find women—the real kind—beautiful. But I feel it the way one might feel about some ancient Greek goddess: the love was beyond the reach of us mere mortals. And besides, it’s a fantasy. Some real women have fetishes for guys like me, guys all modded up, half-machine, half-computer program. But those types of women are just characters trying to escape from a page. I’m an anachronism in their world as much as they are in mine.

Modded women aren’t for me either. I tried. I never met one interested in much more than sex and themselves. And sex ended up being more about trying out new mods than anything else. Agility mods mean sex becomes an act out of those old Cirque du Soleil shows. Then there are those tantric mods that mean whoever I sleep with ends up somewhere else, with someone else. I just become a flesh accessory.

So that leaves me here, uncomfortable with this strange woman—an almost real woman. Sure, I want to leave. But there’s a whisper in my ear from the Boss, “You’re on.”

Tom Borthwick is an English teacher, adjunct professor, and MFA graduate of Wilkes University. His stories have appeared in “Theme of Absence,” “Bewildering Stories,” and most recently in the cyberpunk anthology, “Altered States.” 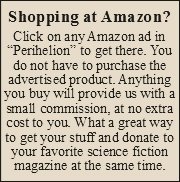